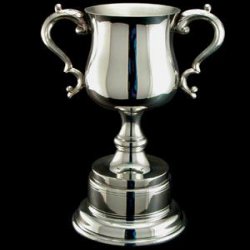 The Rimet trophy was made of lapis lazuli and gold plated sterling silver. The trophy was of the goddess Nike, who is known as the winged goddess of victory. It had to be replaced after Brazil won it for the third time in 1970,  since according to FIFA any team that won the trophy three times would win the trophy outright. Sadly, the trophy was stolen in 1983 while it was on display in the Brazilian Football Confederation Headquarters. Although four men were convicted of the theft, the trophy was never recovered. In 1984 a replica of the trophy was made and presented to the President of Brazil. END_OF_DOCUMENT_TOKEN_TO_BE_REPLACED