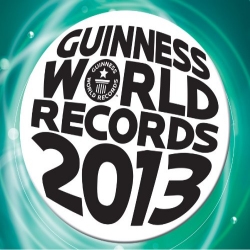 Many people dream of being a famous athlete and having their name listed among the record books. Unfortunately, the Olympics occur only once every four years and only one person or team receives the gold medal. There are well over six billion people on the planet, and of these, only about 10,000 will attend the next Olympics. Therefore the chances of obtaining a gold medal are about… 22 million to one! However, for those of you who are truly determined to get your name in the record books there are other ways. Below are a few examples of some of the stranger records which you might want to try to break!

What about growing your nails? Sound easy? According to the Guinness Book, the world record for the longest fingernails is 28 feet 4.5 inches. Lee Redmond set this record in 2008. According to Lee, she started to grow her nails in 1979. Sadly for Lee, her nails were lost in a car accident in 2009.

What about your hair? There are a number of strange records when it comes to hair growing. The record for the longest hair is held by Xie Quipping. She has let her hair grow since the age of thirteen, and when her long tresses were measured in 2008, they measured an astounding length of 18 feet 5.54 inches. Another related record is the title for the world’s largest afro held by Aevin Dugas. The circumference of her huge hair-do measures 4 feet 4 inches.

Looking for a faster way to get into the record books? Ashrita Furman got his name into the books by pogo sticking 11.5 miles up the side of Mount Fuji. Whether this record is beat or not, Ashrite is determined to make certain that his name remains in the books. He currently holds the record for being the person who holds the most records! As of 1979, he has broken or set over 400 world records and he currently holds 151.

What about doing something as simple as taking your clothes off? If you want to beat this record, you will need to able to remove your clothes in less than seven seconds.

Are you an animal lover? There are countless records which include critters and animals. Why not see how many bees you can have on your body. To break this record, you will have to be able to hold more than 87 pounds of bees!

You could see how many rattlesnakes you can fit into your mouth. This weird and dangerous feat was done by Jackie Bibby when he managed to get thirteen snakes in his mouth simultaneously. Part of the record stated that the snakes had to be in his mouth for at least ten seconds and he could not be bitten. I wonder if anyone mentioned that fact to the snakes?

You could start training your dogs to jump rope. The current world record holder is Uchida Geinousha and her thirteen dogs Leo, Doremi, Button, Koume, Aya, Kimchi, Nami, Mayonnaise,  Ann, Sumire, Kurobe and Akebi. She is able to get all them jumping at the same time as part of her act in Uchida Geinousha’s ‘Super Wan Wan Circus’.

You might want to try eating worms. To get this record you have to be able to eat more than 200 worms (night crawlers) in thirty seconds. This gross feat was accomplished by a hotel manager in India. To follow up this performance he then passed a snake through his nose and out his mouth!

If none of these things are appealing or you don’t think you can achieve the current levels, you could always try combining your efforts. Why not try eating worms while jumping rope or hopping on a pogo stick? One of the great things about records is that they are always changing and new ones are being set and created every day. So, if you really want o get your name in the books, there are many ways you can accomplish the feat!