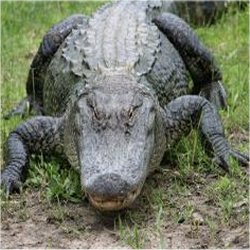 Golfer
Gator attacks golfer. In 2009, a man was attacked by an alligator while playing golf at the Ocean Creek Golf Course on Fripp Island, South Carolina. Friends were able to pull the man away from the gator but he lost his arm in the struggle. The alligator was caught by a team from the Tracks Wildlife Control who then removed the arm from the animal’s stomach. The arm was shipped to the hospital with the hope that doctors would be able to reattach it.

Raymundo Velasco
Forty-nine year old Raymundo Velasco was hired to clean up the beaches around Lake Osborne, Florida. He said he was dragged into the water but somehow escaped. He then simply went back to work after putting on a makeshift bandage. It was a neighbor in the area, Anneli Kuebler, who noticed the injury and called a sheriff’s deputy for help. Raymundo was taken to hospital to have his injuries treated. END_OF_DOCUMENT_TOKEN_TO_BE_REPLACED