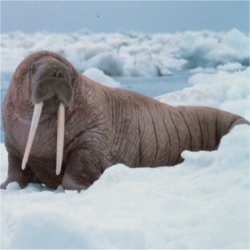 The North is home to some of the most unique and fascinating animals in the world. One these creatures is the walrus.  The walrus is subject to many legends and myths among the native communities of the north and has played an important role in their culture and daily lives.

A group of walruses is called a herd. The largest walrus herd lives in Foxe Basin, Canada. The herd is made up of more than 5 000 individuals. Animals move from one herd to another. If startled walrus herds will stampede.

Walrus babies are called calves. Calves weigh between 45 and 75 kg at birth and are able to swim. Most calves are born between April and June. Calves will stay with their mothers for up to five years.

In the wild walruses can live for 40 years.

Sharks, whales and polar bears are among the few animals that will hunt and eat walruses, although even they tend to avoid fully grown healthy adults. They prefer to attack, young or sick walruses.

If you want to know how old a walrus is, you can count the number of rings on its teeth in much the same way you count the rings of a tree.

A walrus has two tusks which are made of ivory. Tusks have been known to grow as long as three and a half feet. Walrus tusks have been carved for centuries. Tusks can weigh over 1.5 kg (about 3 lbs).

The Latin name of the Walrus is Odobenus rosmarus, which translates to mean ‘tooth walking sea-horse‘. The walrus has two sub species, the Pacific Walrus and the Atlantic Walrus.

Walruses face the most danger from man. Past hunting of this animal led it to near extinction. The walrus populations are now carefully monitored. Certain aboriginal cultures are still permitted to hunt the animals, as they are still a large part of their survival and culture. The sale of walrus ivory is carefully watched world wide.

Walruses spend most of their life on land. An adult walrus can dive up to 80 m and stay underwater for up to half an hour.

A walruses tusks never stop growing. They use their tusks to help make breathing holes in the ice. Walruses use them to pull their enormous bodies out of the water and onto the ice floes. The tusks also are used for fighting and as a sign of stature within the herd. The longer the tusks, the more important the animal.

Unlike their close relatives the seal, walruses have four flippers. When they walk on land they rise up on all four limbs, they do not have to drag their huge bodies across the ice.