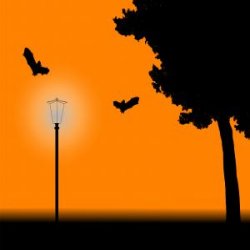 Halloween is celebrated on the 31st of October. Halloween is actually a short form for the name, All Hallow’s Eve.

In Canada and the US, Halloween is celebrated by wearing costumes and trick or treating. Many of the traditions and games associated with Halloween come from Ireland, Germany and England. Popular Halloween traditions also stem from both pagan and christian beliefs.

The colors of Halloween are black and orange.

Seeing a spider on Halloween is said to be very lucky. A spider on this day is believed to be the spirit of a loved one watching you.

Every year in the US, about two billion dollars worth of candy is purchased for Halloween. Halloween candy is given out as part of trick or treating. Children dressed in costumes go from door to door, saying the words trick or treat. According to custom if a person gives a treat to the child, the child will go to the next house but if they do not give a treat, the home owner  may discover that a prank or trick has been played on them.

On Halloween if you want to meet a witch, you have to wear your clothes inside out and walk backwards.

The first individually wrapped candy was the Tootsie Roll.

Owls are the only animal that will live in the same area as a ghost. This is why you will often see owls living near old and abandoned buildings that are reputed to be haunted.

Black cats are often pictured with witches. There are a couple of reasons for this. One is that witches who like to have familiars often have them in cat form. The other reason is that a black cat is said to protect a witch from anyone who may wish them harm.

Pumpkin carving comes from Ireland. Orange is the most commonly seen pumpkin color but they do come in white, green and yellow.

Pumpkin seeds are edible. They are very tasty when spiced and roasted in the oven.

Halloween is the second most commercial holiday. Christmas is the first.

Halloween night,  according to the Celts, is the night when the veil between the living and the dead is the thinnest. To avoid evil spirits people took to wearing masks. They did not want the spirits to know that they were alive for fear that the spirits may enter their body.

To keep evil spirits out of the house, people would sprinkle salt on all the window sills and doorways.

Candy corn is the best selling candy at Halloween.

In the past  few years the most popular girls costume was that of a princess.

Popular tricks on Halloween are egging and toilet papering.

Apples are another fruit which play a large role in Halloween celebrations. Candy or taffy apples are very popular at Halloween.

Apple bobbing is a popular game played on Halloween. It is called dooking in Scotland. The rules say that the first person to get an apple will be the next person to marry. A variation of this game which is becoming more popular is to hang the apples from the ceiling.