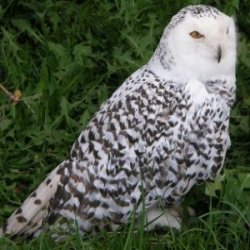 One of the most recognizable birds in the world is the snowy owl. Their white plumage and yellow eyes are very unique and distinctive. Snowy owls are among the few birds that make the north their year round home. These majestic birds have been used on currency and stamps throughout the world. They have also made their way into fiction and into popular culture.

They are probably the most powerful of all the owls.

The snowy owl is also known as the great white owl or the arctic owl.

The snowy owl is the official provincial bird of Quebec. These birds are protected in Canada.

A group of owls is called a parliament. A clutch refers to a group of eggs laid by an owl. Snowy owls will have between 2 and 11 eggs in one clutch.

Snowy owls are considered to be diurnal. They hunt both at night and during the day.

The Inuit call these birds, ookpik.

Mating season for snowy owls begins in March. During the mating season males will strut, puff themselves up and drag their wings on the ground to impress females. Males may even hold kills in their beaks in their efforts to attract a female. Owls will often stay together for life.

The owls are very careful not to leave their eggs unprotected. The male will guard the female and the young chicks. Any threat to the nest will be met by aggressive behaviour, by both the male and the female. They will dive bomb predators and attempt to lure them away from the nest.