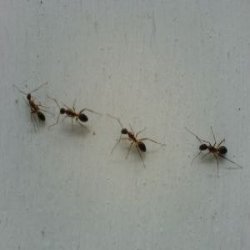 It is estimated that at any time there are more than one quadrillion (1 000 000 000 000 000) ants on the planet. They live on every continent of the world except Antarctica. They are both invasive and adaptable insects, which is why they have been around for millions of years.

There are over 12500 recognised species of ants.

All ants have six jointed legs. They have three body sections the abdomen, the thorax and the head.

Ants have a pair of antennae which they use for both touching and smelling objects.

Ants have two eyes which are made up of many smaller eyes. These eyes are referred to as compound eyes.

The average life span of an ant is 45 to 65 days. The ant goes through four distinctive stages in its life, the egg, the larva, the pupa , and the adult.

All ants have a specific function within the colony. There is a queen, workers, soldiers and the males.

There may be more than one queen in a colony. The queens are born with wings but lose them shortly after mating.

Workers are sterile, wingless females. They gather food, take care of the eggs, enlarge the nest and take out the trash.

Ants have two stomachs. One stomach is for them, the other is used to transport food back to the colony.

Males have wings. Their sole job is to mate with the queens.

Ants are able to lift things 20 times their own weight. They are also incredibly fast runners in proportion to their size.